So after a recent move with work to Canada, I have had a bit of bonsai withdrawal! I found what claims to be one of the largest bonsai nurseries in North America only 45mins from our new home.

Japan Bonsai is a 10 acre of bonsai nursery in White Rock B.C. The website is a little informative, if a little lacking in pics of What can be found there. It seems the proprietor Tak Yamaura, studied under Toshio Kawamoto of Meiju-En and creator of the Nippon Bonsai-Saikei Institute and Saikei form. Tak moved to Canada in 1970 and established Japan Bonsai. From the pics that are to come it seems that he immediately started planting shimpaku into the growing field!

On approach to Japan Bonsai, a teaser of what’s to come!

As I stepped out of the car I was greeted with quite a large greenhouse, things are looking promising!

I was met indie the front door by Bruce Burkett, the manager of the nursery. Quite a nice bloke, we had a quick chat about bonsai, but I was keen to see some trees.

Junipers on the first bench I saw

The stock seemed a reasonable price considering the number of years that have gone into training them, there were 40yr shimpaku that ranged from $500-$1000. There were some really nice twisted ones around the $500 mark, they’d need around 5 years in a pot, a number of chops and shari but they be great little shohin with a little work. 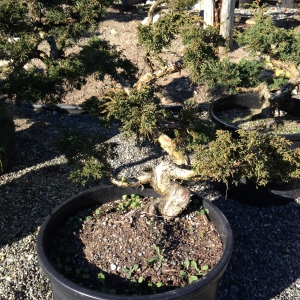 I had this on picked out, but I received a chippy-slap from the minister of war and peace, and the remark “We don’t have a yard, you always say people shouldn’t keep them inside”! So I’ve started looking for a place with a yard to rent!

More to come including the Growing Fields, JBP shohin, False Cypress, and Satsuki.

My name is Scott Roxburgh and I am a bonsai enthusiast from Canberra, Australia. I have been studying bonsai for 7 years and more recently under Boon Manakitivipart. My favourite species are Japanese and Trident Maples, Japanese Black Pine, Shimpaku, and Satsuki Azalea. Email me at scottroxburgh@hotmail.com